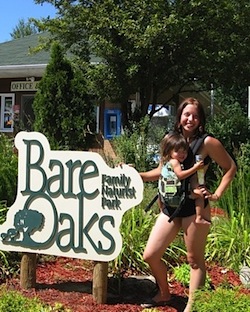 Which term is used depends partially on where you are. In Europe, the term “naturist” is used almost exclusively while “nudist” is often derogatory. In the United States, most people who attend clubs call themselves nudists because they belong to the American Association for Nude Recreation (AANR) who uses the term “nudist”. Americans who go to free beaches tend to prefer to identify themselves as “naturists” because historically, the Naturist Society (TNS) has been the biggest defender of free beaches in the United States. In Canada, the official naturist organizations are called the Federation of Canadian Naturists (FCN) and the Fédération québécoise de naturisme (FQN) but many Canadian use “naturism” and “nudism” as synonyms.

At Bare Oaks, we believe that naturism more accurately conveys what the movement is all about. Our philosophy is much more than just taking your clothes off and the term “nudist” suggests that it is only about nudity. It is a life philosophy with physical, psychological, environmental, social and moral benefits. Furthermore, we argue that it is not about nudity. It is about respect for self, for others and for nature. It is about being more natural. But clearly nudity is a critical tool that we use to achieve those goals.

Yet many people who call themselves nudists still clearly hold naturist values. So what matters most is what a person believes and how they act.

Listen to a podcast where people from North America and Europe discuss the two terms.

Over time, people sometime change from being a mere participant in naturism to being an activist. But not everyone sees naturism as a life philosophy. Thus we introduce two categories within naturism: the Ethical Naturist and the Recreational Naturist. These are not finite classifications. Rather, it is a scale with most people positioned somewhere between the extremes.

Many people start out as Recreational Naturists for the simple reason that it just feels great to be free of clothing. There is no denying the fact that skinny-dipping is one of the great joys in life. From that initial beginning, many naturists progress to understand the more complex ideology behind the movement – but not all do.

The Recreational Naturist views nudity only as a recreational activity. While they enjoy being nude, it is only within the confines of their club or while at the beach; most are rarely nude in their home. Generally they don’t see any naturist implications out in the textile world.

Since there are few principles connected to their nude activities, the Recreational Naturist is unlikely to object to fashion trends or how people are portrayed in the media. The objectification of the body and unattainable standards of beauty are probably not concepts that concern them. They are likely to judge others on their looks and sexuality. Some even yearn to wear items of fashion in naturist environments; which is why many of them prefer a clothing-optional environment. Almost certainly, the Recreational Naturist doesn’t associate getting closer to nature with their hobby.

Many prefer the term nudist since nudity is what it is all about for them. But some use the term naturist as a euphemism for nudism because they think the word will be less offensive to their relatives, friends and neighbours.

At Bare Oaks Family Naturist Park, the office staff works nude. As naturists, we see the human body as wholesome and natural. Since we deplore the use of clothing to denote status, having staff wearing clothes (or worse uniforms) seems counter-intuitive. Yet some people have fiercely criticized that policy as “unprofessional”.  In discussing the issue with some of the critics, it became clear that they saw nudity only as an alternative to the bathing suit. That made sense. If you visit a Caribbean resort in the textile world, you would not expect the office staff to be wearing bathing suits – that would indeed seem unprofessional. So consequently, nudity in the office at Bare Oaks appeared unprofessional to the Recreational Naturist.

While Ethical Naturists enjoy the freedom of being nude, they also see naturism as a creed and a life philosophy. They believe that it is immoral to make people ashamed and embarrassed of their own image. They understand that society’s attitude towards the human body results in a lack of self-esteem.  The consequence is often a lack of self-confidence and the beginning of a variety of emotional dysfunctions. Accordingly, they strive to accept their natural selves and to respect others.

Respect for the body also leads them seek out healthier practices for their physical self. The Ethical Naturists see themselves as part of nature and consequently endeavor to minimize their impact on it.

Thus naturism is fundamentally about ethics and morality for the Ethical Naturist. So much so that it even takes on a spiritual dimension for some.

Although cultural restrictions generally limit nudity to their club, beach and home, the Ethical Naturists bring their ideals everywhere. Naturism is a creed that shapes how they perceive the world and how they react to it. They seek to incorporate the principles of naturism in all aspects of their lives.

Some Ethical Naturists identify themselves as nudists but many prefer to call themselves naturists because they see that it is more representative of the complete ideology.

Although nudity is preferred, the Ethical Naturist can practice naturism even when clothed.

Again, it is important to understand that most people don’t fit neatly into either category nor will anyone manifest every single characteristic described. Like many classifications, these two categories of naturists represent a continuum with almost all people positioned between the extreme ends. But for those who believe that naturism typifies an ideal for a more wholesome society, being an Ethical Naturist should be the goal.