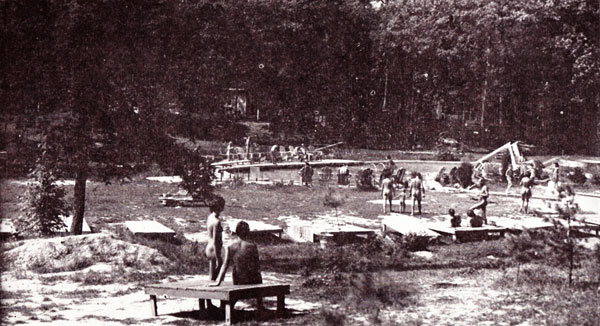 It all began with Eric and June Jarvis. They first joined Sun Valley Gardens (1954-1982) north of Fonthill, Ontario in the Niagara area.

The owner, Karl Ruehle was known as a particularly autocratic and tight-fisted individual. When Eric made suggestions, he was told by Karl that “if you don’t like it, leave.”

They then joined Glen Echo Family Nudist Park (a.k.a. The Toronto Gymnosophical Society) and stayed as members for 9 years. But by this time, Eric had his own ideas about how to run a club. He hired a real estate agent to search for a suitable property.

The land consisted of a road to a bridge over the river, and three cleared areas that were covered with ferns and brambles. 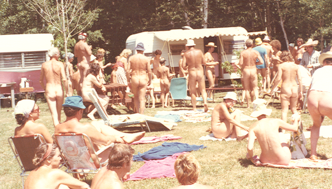 The first year was spent dredging a lake fed by a creek and natural springs. (Now known as Jarvis Pond) They also dug a well for drinking water, working weekends and living in Toronto while holding down a job during the week. 1973 was their first year as an official nudist club. They called it the Toronto Helios Society at Haytor Leisure Park (the sign said that Haytor Leisure Park was open to the public for winter activities). Only eight couples joined that first year. Most visitors found the facilities too primitive. 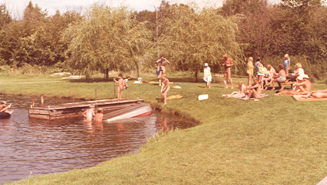 They were disappointed with their first year but they persevered and gradually added facilities including another bridge, an extension to the lake, hook-ups for trailers, extensive grass seeding and grading for new lawns, and a clubhouse that is today known as The Outback. In 1978, the Jarvis’ started building a new house with 3,000 sq. ft. of living area for themselves and a full basement to serve as a winter clubhouse for dances and parties. They also added flush toilets with showers in both the tent and trailer clearings. They moved into the new house in September 1979.

In May 1984, the ASA (now AANR) was notified by Eric and June Jarvis that they could no longer operate Toronto Helios as a club for nudists only and were changing it to a trailer park open to the general public. According to Eric, it was a sad decision that was based on a variety of factors (increased taxes on the property of an additional $1200, loss of job for Eric, etc.) They hoped that by converting it to a regular campground the income would increase and give Eric gainful employment. 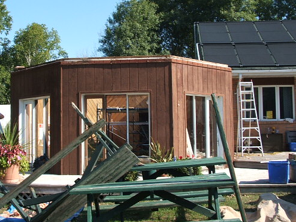 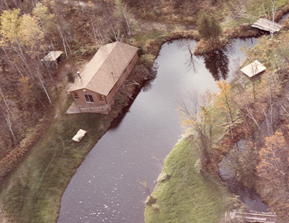 April 29, 1992 Eric and June Jarvis sold the property to Town & Country Resort Inc. For the next 8 year, the land hosted a variety of non-naturist businesses including an attempt to open a KOA campground.

On February 12, 2001, Carol and Larry Bean purchased the assets of Town & Country Resorts Inc. with the plan to return it to its former status as a naturist club. They renamed it The New Forest Family Naturist Resort . Unfortunately, the property had not been well maintained in recent years and much of the infrastructure needed significant work.

They remodeled the main clubhouse and added 6 new motel rooms. The events room was completely renovated with new washrooms and a new dance floor. The roof of the whirlpool was rotten and had to be completely rebuilt. The store and office were also redesigned and rebuilt.

The property’s infrastructure was completely refurbished. Septic systems were repaired or replaced. New water treatment and distribution systems were added. 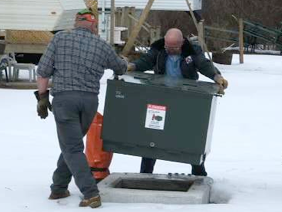 The entire park’s electrical network was replaced with a new underground system that provides a minimum of 30 amps to all campsites. Road and parking lots were rebuilt and expanded.

Facilities were also added or improved. A modern shower and toilet building was built for the seasonal campsites. Lounge chairs, swings, a volleyball court, and an exercise room were added.

But the most visible impact that Carol and Larry had on the property was the construction of a new 1-hectare (2.5 acres) lake. It provides a new focal point for the club and many new recreational opportunities.

On December 22, 2006, Carol and Larry sold the property to Linda and Stéphane Deschênes. It was more of transition than a sale since Carol and Larry ensured that the property was sold to someone who would continue to develop the park as a naturist club. The park was renamed Bare Oaks Family Naturist Park for a variety of marketing reasons and as a wordplay on their last name. (Deschênes is French for ‘of the oaks’) It is now up to Stéphane and Linda to grow the club and provide for naturism in the 21st century.

For a complete history of naturism, you can read Dr. James Woycke’s book, Au Naturel: The History of Nudism in Canada, available in the Bare Boutique.

There are many hints to Bare Oaks’ history in the names you find throughout the park. To learn more click here.