For most of human history, nudity was a natural and normal part of life. People were nude when environmental conditions favoured it. The “bathing suit” is a very recent invention dating back about a century. It is only with the advent of industrialization that humans began to be ashamed of their bodies. As we began to replace our natural world with manufactured goods, we grew to see all that was not man-made as imperfect. The human body became an object of shame to be hidden and shaped by clothing. 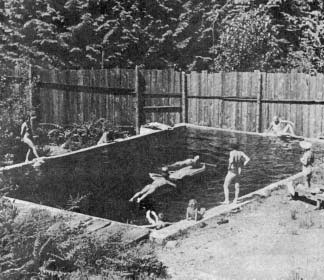 Naturism began as a self-help reform movement in reaction to the debilitating aspects of industrialization and urbanization during the nineteenth century. At a time when medicine could neither explain nor cure disease, many people believed that crowded and unsanitary cities, tenement housing, restrictive Victorian clothing, and oppressive working conditions all led to poor health. Some observers concluded that what people needed was exposure to the natural healing elements or fresh air, sunlight, and water–preferably with loose or absent clothing. An informal coalition of natural lifestyle reform movements took shape during the late nineteenth century, combining clothing reform, vegetarianism, abstinence from alcohol and tobacco, and naturopathy. Some pioneers suggested that nudity be an integral part of lifestyle reform. Naturism found expression in books written in Germany at the end of the century by Heinrich Pudor and Richard Ungewitter, and the idea received cultural support when the first modern Olympic Games in Athens drew attention to classical nudity. They called it Freikörperkultur (FKK) which means ‘Free Body Culture.’

From theory it was a short step to practice. Experimental clubs opened in Germany, and later in France and England, where individuals could practice their natural lifestyle without outside interference (as long as they stayed on private property). Since the early clubs were experiments in natural living, they imposed the full natural regimen on all guests: nudity rain or shine, abstinence, vegetarianism, and mandatory calisthenics. Many guests decided that the practice was not as attractive as the theory, and while some of them deserted the cause completely, others noticed that social nudity had a positive psychological effect which they appreciated. When people removed their cultural body armor they felt more free and less stressed than during their everyday lives. People were who they were, not what they pretended to be behind their textile uniforms, jewelry, and makeup. This relaxed social ambiance became the hallmark of twentieth century social naturism. 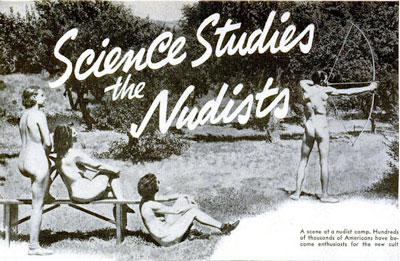 Several other trends hastened the acceptance of the nudity aspect of naturism. Youth at the turn of the century embraced the great outdoors, and went off hiking and canoeing around the countryside–often nude, and often in mixed groups. Western society underwent a sort of sexual liberation at this time, and relaxed many of its moral standards. The First World War had a similar effect. As a result naturism was poised for rapid growth during the 1920s, especially in Germany, where tens of thousands of people romped in clubs, free beaches, and city parks and swimming pools. Other countries experienced a boost in naturist clubs too, including the Sparta Club in France and Spielplatz in England. National magazines were well established also (Health & Efficiency in Britain, Vivre d’Abord in France. In 1931 representatives from various clubs and societies gathered in Germany to form an international nudist organization. The depression years were not the best time to start new ventures, and this early experiment came to an end, but the pioneers had established naturism on sound footing, and it would revive and flourish in Europe after the next war.

Naturism in North America followed the European pattern. Bernarr Macfadden, an early pioneer of health reform, promoted natural living in his Physical Culture magazine and at his Physical Culture City, as did William Call in his Common Sense Clubs. But the first true naturist club was formed in New York State by Kurt Barthel and a handful of German immigrants. Their Sky Farm Club became home to the early International Nudist Conference, which attracted Ilsley “Uncle Danny” Boone, who seized control, reorganized the American Sunbathing Association, and launched Sunshine & Health. Other clubs soon appeared in nearby states, the Midwest, and California. When ASA members rebelled against his one-man show, he left to form the National Nudist Council. 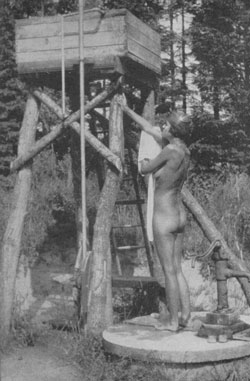 In Canada, individuals around the country became interested in naturism, skinny dipping, or physical culture, and occasionally found their way to American or European magazines. After 1940 they had their own Canadian magazine, Sunbathing & Health, which occasionally carried local news. Canadians had scattered groups in several cities during the 1930s and 1940s, and some of these groups attracted enough interest to form clubs on private land; the most significant clubs were the Van Tans in Vancouver and the Sun Air Club in Ontario. Canadians who served in the military during the war met like-minded souls from across the country, and often visited clubs while in Europe. They formed a ready pool of recruits for postwar organizers. A few years later the wave of postwar immigration brought many Europeans with their own extensive experience, and they not only swelled the ranks of membership, but often formed their own clubs, helping to expand naturism from coast to coast. Most of these clubs were united under the Canadian Sunbathing Association, which affiliated with the American Sunbathing Association in 1954. Several disagreements between eastern and western members of CSA resulted in the breakup of CSA into the Western Canadian Sunbathing Association (WCSA) and Eastern Canadian Sunbathing Association (ECSA) in 1960. The ECSA endured much infighting over the next decade and a half leading to its official demise in 1978. The WCSA continues to exist today as the Western Canadian Association for Nude Recreation (WCANR), a region of the American Association for Nude Recreation (AANR) http://aanr.com which itself was formerly known as the ASA.

In 1977 the Fédération québécoise de naturisme (FQN) http://fqn.qc.ca was founded in Québec by Michel Vaïs. In 1986, Doug Beckett, Helen Beckett and Petra Scheller, with the support of the FQN, formed the Federation of Canadian Naturists (FCN). http://fcn.ca The FQN and FCN joined together to be the official Canadian representatives in the International Naturist Federation (INF). http://www.inf-fni.org

For a complete history of naturism/nudism in Canada, visit www.NudistHistory.ca