When Sun Valley Gardens closed for financial reasons in 1982, it was not before having had a significant impact on Ontario’s naturist scene. Almost every existing club in Southern Ontario (and a few that have since closed) in some way owe their existence to former members of SVG. 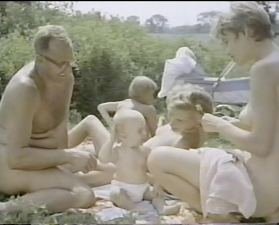 Through a great deal of energy and vision, he quickly built up the club’s membership. He was also known for his promotional ability. His yearly open house generated a great deal of press coverage. Unfortunately, he lacked the customer service skills to keep members. According to the book Au Naturel: The History of Nudism in Canada, Ruehle was regarded as “autocratic and tight-fisted.’”

Federation of Canadian Naturist staff repeatedly tried to contact Mr. Ruehle by phone, mail and in person to get his side of the story. Unfortunately, there was no response. The pictures below were taken on two personal attempts to contact him. (May 10, 2006 and June 15, 2006)

It was subsequently learned that Karl Ruehle passed away in August 2006 after a lengthy stay in the hospital. He had had a stroke in the early part of the year which he did not recover from. This is probably the reason that the FCN never received any response.

Walking the property was eerie. It seemed like naturists just walked away and abandoned the place as it was. It was like wandering through a post-apocalyptic science-fiction movie . To see photos from that visit, click here.

From the Federation of Canadian Naturists Library:

Karl and Marlies Ruehle are interviewed in 1961 at Sun Valley Gardens by June Callwood on CBC-TV’s Close-Up.

Excerpt on Sun Valley Gardens from:

Au Naturel: The History of Nudism in Canada 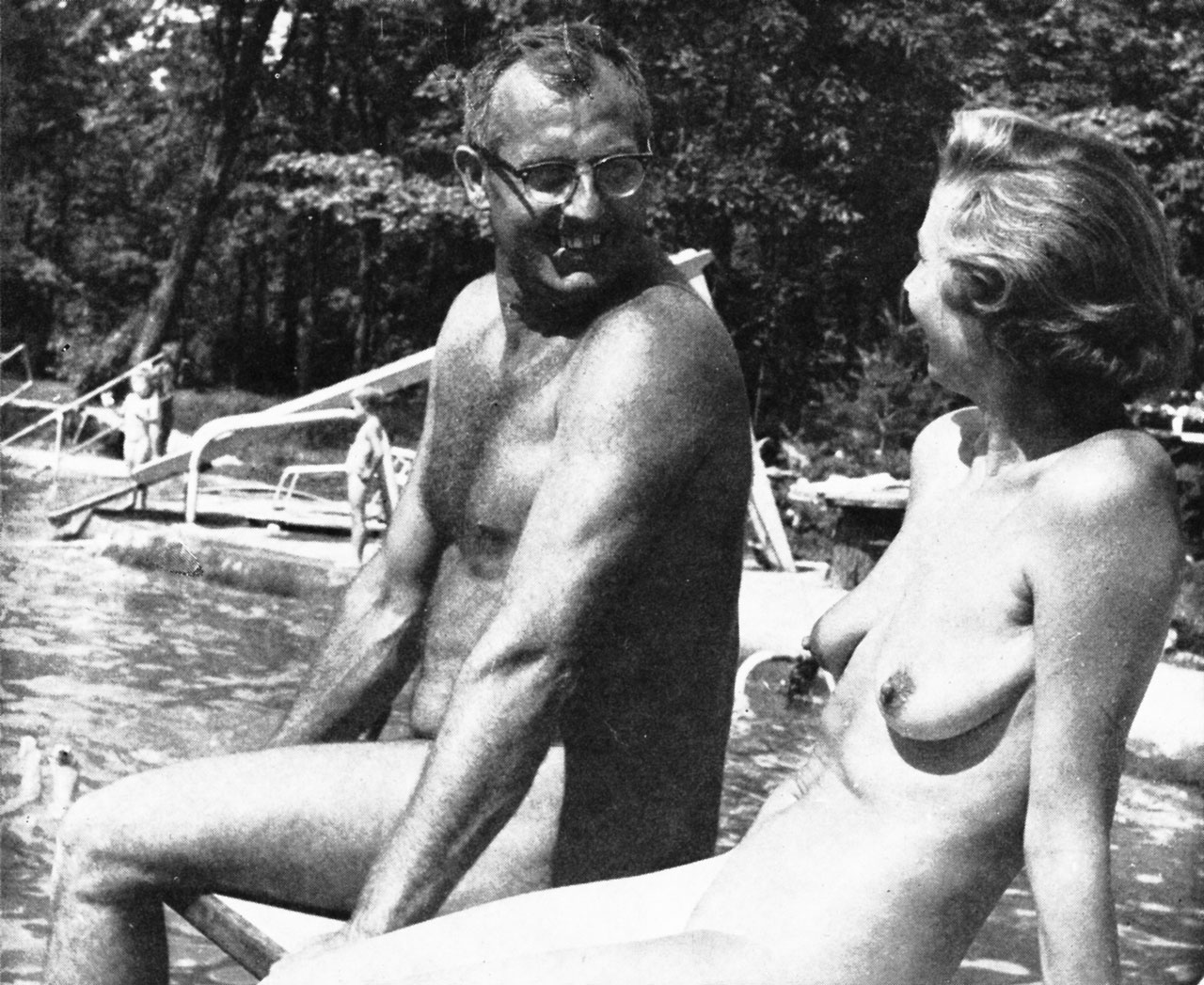 Sun Valley Gardens (SVG) started the 1954 season with 25 acres of wooded farmland and eighteen adult members. Another seventy people joined as work progressed. “Everywhere you see the product of industry and of imagination.” In 1956 the 80-foot kidney-shaped swimming pool was completed, and would long remain the centerpiece of the club. Then another 14 acres was acquired, and Ruehle promoted Sun Valley Heights—a nudist subdivision where people could “live a most natural life all year ‘round.” Another project, the Sun Valley Health and Recreation Club, would contribute to the club’s later split with the CSA. 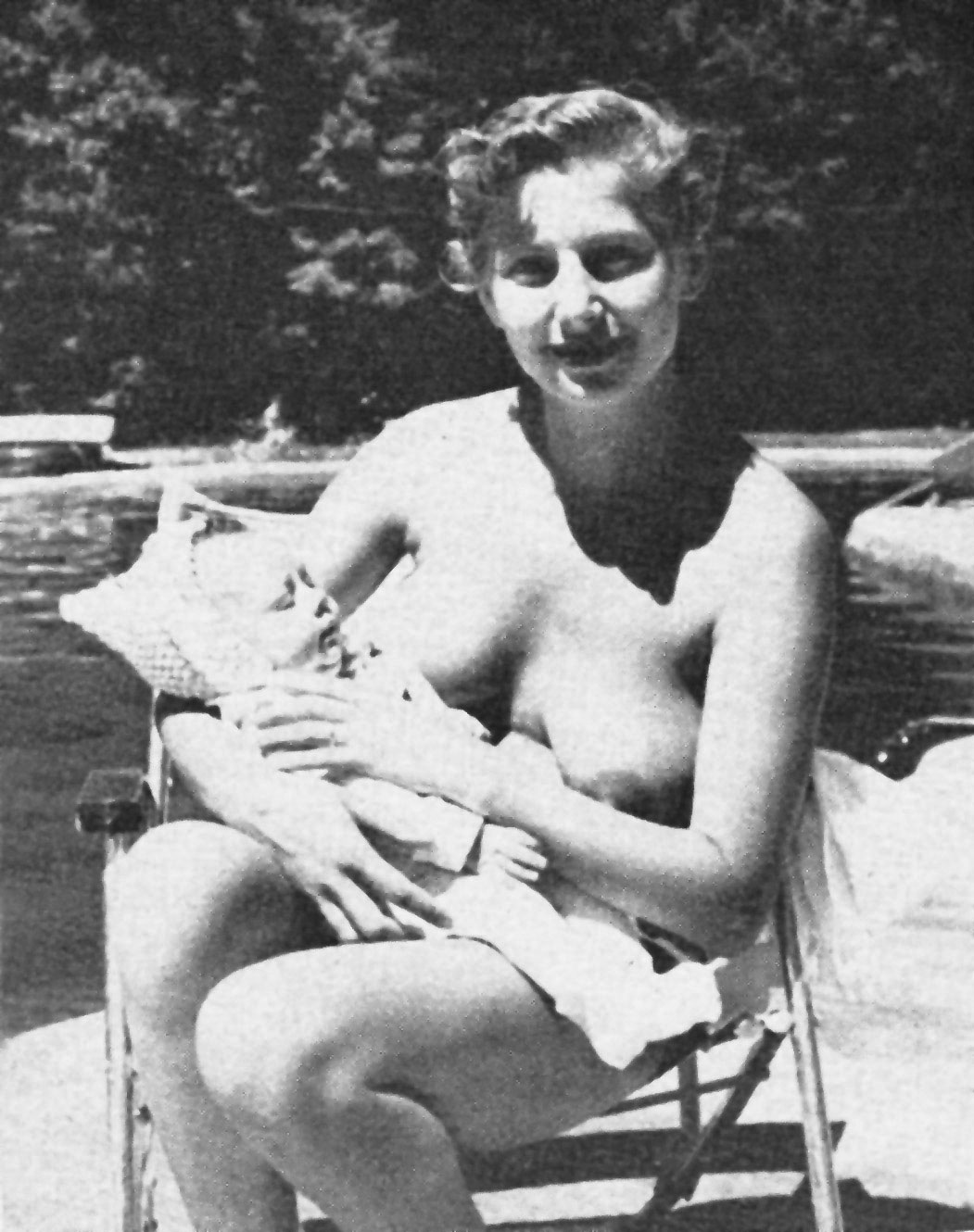 By this time Sun Valley had more than 300 members, and was “undoubtedly Canada’s largest and finest club.” The phenomenal growth stemmed from Ruehle’s active, indeed aggressive publicity campaign. He distributed press releases, bought paid advertising, and appeared on talk shows and TV programs such as the “Claim to Fame” show on CHCH Hamilton where he won a wristwatch because no guessed that there was a nudist camp proprietor in darkest Ontario.

Ruehle’s most successful publicity stunts were the open house days that he started in 1956. In early May he invited the press out to discuss his plans for the event, and Toronto Telegram reporters Ron Collister and Ian Paterson duly wrote about “a warm naked welcome,” although the lone reporter for the tabloid Hush explained that the Telegram sent two men so that one could keep an eye on the other, and cautioned Ron Collister against greeting nude young ladies with an overly enthusiastic “Wowie!” 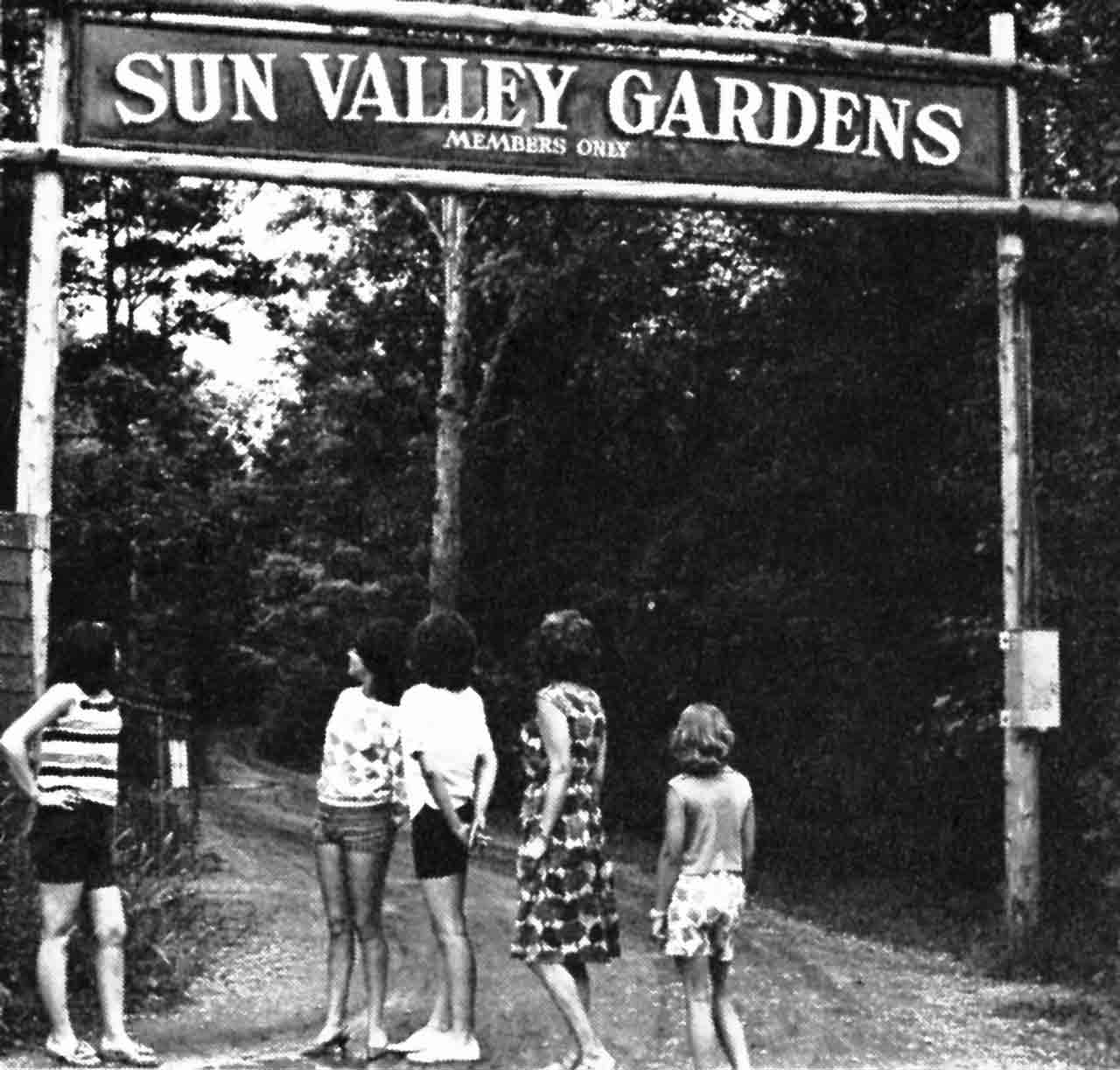 Sixty local officials received invitations to visit camp on 24 June 1956. Although only one lonely deputy reeve showed up, he was accompanied by an army of thirty reporters and photographers who provided “longer and more detailed stories than we have ever had in the West.” The day before the nude open house the general public was invited to visit the club while members were dressed “in order not to offend anyone not accustomed to our way of living.” Five hundred people toured the camp, and more than 100 inquired about membership and a return visit under normal conditions.

In 1959, Ruehle opened Sun Valley Gardens to the general public on Saturday, May 30, while members were nude. Over 1,000 visitors signed affidavits that “at no time and in no way will we object to—or feel offended by—the nudity and activities of the people whom we see or meet.” Many were not only not offended, but joined in nude activities, and nearly 100 joined the club. There was full media coverage from Toronto and Buffalo newspapers and the Canadian Broadcasting Corporation. The event confirmed Sun Valley as “the largest and certainly the most progressive club in all of Canada.” It also split the club apart.

By 1959 Sun Valley Gardens was “not well known for the democratic spirit of its leaders.” Members and visitors alike regarded Ruehle as autocratic and tight-fisted. He objected when people moved camp furniture, even if only to place a chair or picnic table in the shade. He interrupted games and competitions if they lasted longer than his schedule allowed. He closely monitored new couples in their tents. Many saw him as a “boot stomping Prussian.”

For years members had been leaving Sun Valley to form new clubs. London Sun Club, Sunshine Ranch, Sunny Glades, Sunny Acres, Ponderosa, and Lilly Valley all had their origin in SVG alumni. In most cases Karl wished them well, and stayed in touch. Only one effort did he thwart, an attempt by a former member to set up a rival camp virtually across the street. But the farmer whose land was up for lease, and who knew Karl well, reneged on the deal after Ruehle spoke with him. 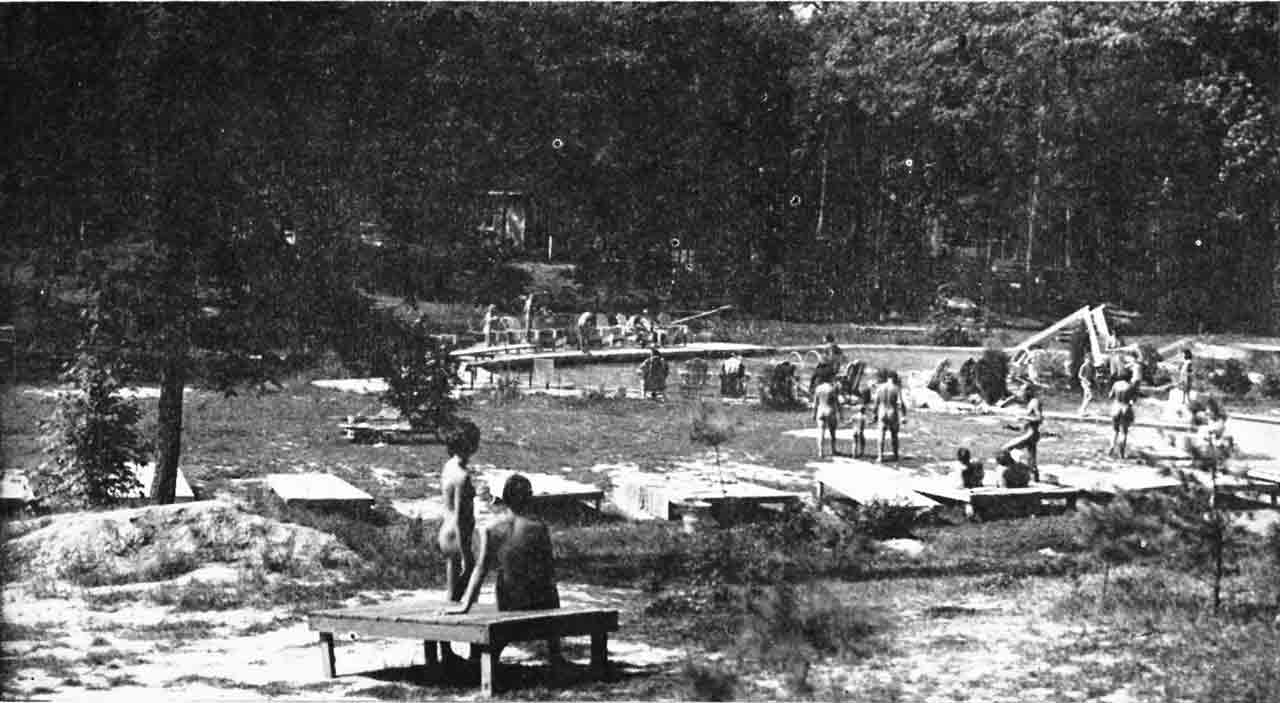 In later years Ruehle moderated his policy and his behavior in response to the continuing defection of Canadians to new clubs in Ontario and the emergence of nudist clubs in New York State—home to half of his members—once that state relaxed its anti-nudity laws. In fact Ruehle, who started out advocating European-style naturism over American-style nudity, soon settled into a “very mellow” practice of nudism. By the 1970s Sun Valley Gardens admitted singles as well as couples regardless of whether they were divorced, separated, or married with a reluctant spouse. Body contact and even sex were permitted, if not encouraged. Moreover, Sun Valley offered a health club with communal bathing and massage; a social club for dances and parties; and a camera club with nude models in exclusive photo sessions and confidential photo-developing services.

Despite all the attractions, membership continued to decline. In 1974, the twentieth anniversary, only one other original member remained (Ken, also from Sunglades). Although new members continued to drop by, not enough stayed to keep the club going. In 1982 Ruehle put Sun Valley up for sale. When no satisfactory offers came in, he converted the camp into a conventional RV park.

I remember going there as a very young kid in the 70’s!
My dad, Robert Beckwith, was a Niagara Falls, NY cop for 30 years, and my family had a trailer there year round.
Most of the time we spent there was in the summer and on the weekends, of course… but I do remember running from the clubhouse jacuzzi to the pool, jump in the pool (middle of the night in Canada=coooold!) and run back and jump in the jacuzzi!
If you were REALLY brave, you sat in the SNOW then jumped back in the jacuzzi!
I remember every 4th of July my dad would do the bonfire and they would roast a pig on a spit over our firepit..a full-sized pig!!
Usually, 4th of July also included an auction, and I remember getting up in front of the crowd at some talent thing before the bonfire… and singing Bad Bad Leroy Brown, acapella and nothin’ but a smile on!!
I saw a photo somewhere on the site of a little boy statue/fountain.. I have a photo of a 7 yr-old me, standing next to that same statue! I must find it!
Regulars in the 70’s might also remember a beautiful quarter horse named Poco Lady that was kept there…. that was my dad’s horse.
My father was also a professional rodeo cowboy, and kept his personal horse at Sun Valley after he retired from the circuit. Karl had a stable and horse ring, and he let my dad keep the horse there.
I read about Karl’s ‘stern’ manner, and I laugh…. Was he gruff? You bet! He had a camp to run,. 🙂
I think one of his son’s had a moped, and I remember getting swatted on the behind by Karl when he caught me playing on the moped without the least bit of permission….. as an adult, I think ‘good for him’!
…..but him getting mad for something like moving a table in the shade? Ridiculous.
We didn’t even have a permanent cabin, just a trailer, but Karl let my father build a cement firepit big enough to roast an entire pig over! That hardly sounds like an ‘iron-fisted prussian’ to me…
I have (sometimes vague, but) very pleasant memories of going there as a boy.
Waking up before mom, my brother and I would hit the back trails and get a bowl full of fresh raspberries & blackberries… while dad went to the farm down the road and got some fresh milk to add to ’em! I remember playing with friends out in the trails and there was an abandoned hearse in the field, with weeds all grown through it. Well, being kids we just had to explore… until I sat in it and got stung by a huge wasp! By the time I ran back to the trailer,the whole under side of my leg was red!
What’d the folks do? Slap some mud on it! Worked every time!
Seeing the photos makes me sad… if I had the money, I would fix it up myself. I wonder if it is for sale? I just hope nothing happens to make it go away for good…
I wish I remembered Sun Valley with better detail, because what I do remember… makes me smile.
I thank Karl, for creating a place that holds great memories.
Rest in Peace, friend, you earned it.

Bare Oaks Family Naturist Park wants to post more memories of SVG like this one. We are also interested in any pictures anyone can contribute that shows SVG in its heyday. If you were there and would like to share your memories, please send them to info@BareOaks.ca.