Home » Why Nudity is Required

Why Nudity is Required

The “traditional values” portion results from our observation that numerous naturist clubs have lost the philosophy of naturism. To many, naturism is only an occasional recreational activity representing simply an alternative to wearing a bathing suit. Gone are the social, psychological, environmental, and moral aspects of the movement. While we don’t want to revert to the days of mandatory calisthenics, vegetarianism, and alcohol/tobacco bans, we do want to reintroduce naturism as a philosophy and a way of life. Of course, that’s not for everyone; but each person can make a choice whether Bare Oaks is right for her or him. We’re not trying to appeal to everyone. Bare Oaks exists for those who are passionate about naturism.

People often ask why, if naturists are so tolerant of others, Bare Oaks does not allow people to remain clothed if they so desire. (When the environment permits, of course!) On the surface, this call for tolerance seems very logical. That and an aspiration to be more inclusive have been the drivers of the clothing-optional movement in recent decades.

It would be great if we lived in a utopia where nobody cares what we wear and we could be nude anywhere we desired. That may be possible some day. But in our world it is 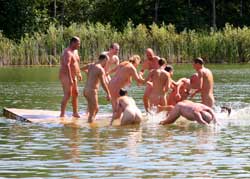 impossible, because of constant social pressure which fosters an incredible amount of body shame and obsession with clothing. These messages are deeply embedded in most people since childhood, and reinforced constantly through the way our world is built and the reactions of others. Most people’s fear of nudity and their body is so deeply ingrained in their psyche that it has become subconscious, instinctual, and emotional.

There are many variations of clothing-optional around the world. They generally don’t work, because they don’t operate independently from the rest of the world. Naturist places are a subset of society, not a truly independent culture. Since the pressures of the textile world are ever-present in naturism, we must apply an equal, balancing pressure in naturist clubs to maintain naturist values.

So naturism at Bare Oaks cannot be clothing-optional, because we are:

Naturism is a philosophy of life. It’s a way of thinking, acting, and looking at the rest of the world. We are fostering respect for self, for others, and for the environment. Complete nudity is fundamental to those values.

Even the most long-time naturist still harbours some discomfort with nudity in certain situations. Whether it’s dancing, eating in a restaurant, or sitting in certain positions, many of us still feel that discomfort. Because of the incessant outside influences mentioned above, nobody is making a truly free choice when they opt to stay clothed. In this social experiment we call naturism, we must help all people to become more comfortable with their bodies in all situations.

There are men in naturist clubs who wear shorts when walking because they feel it is more comfortable. Is it a physical comfort or psychological comfort? A naturist woman once asserted that she felt more feminine with a wrap on. How can she view a piece of cloth as more feminine than her own natural form? When asked why he wraps his towel tightly around his waist, a naturist young man explained that it was the most convenient way to carry it. Is wrapping really easier than throwing it over your shoulder? Is it convenience or rationalization?

In all the examples above, the individuals truly believed what they were saying. The unconscious mind is tremendously adept at rationalizing the reasons for the emotional discomforts created by nudity.

What about those who are new?

We understand that people new to naturism need some time to adjust. If you or someone in your party chooses to stay clothed during the adjustment period, please be respectful of others. Be discreet. Find a quiet spot where you can take some time to adjust. Clothing is never permitted while swimming or using the sauna, whirlpool or showers.

Clothing is used to denote social, economic, political, or professional status. We use clothing not only to shield our bodies when we are ashamed, but to elevate ourselves socially. That leads to an endless cycle where people seek to outdo others, or at least match them. By removing our clothes, we are showing respect for others through real modesty.

As stated by Marc-Alain Descamps, the brilliant French social psychologist whose treatises on naturism are some of the best, “the reciprocal visual bestowal of complete nudity defuses the exhibitionist/voyeur relationship.” If one person is dressed while others are nude, it is difficult, even for a naturist, to get away completely from voyeurism. Conversely, a nude person in front of dressed people, such as a nude model posing for photographers, comprises some elements of exhibitionism.

Making it easier on new people

While a clothing-optional policy might seem to make it easier on new people, it is our experience that it only allows them to delay, indefinitely, the reason for their visit. The more nude people are around, the easier it is for visitors to disrobe for the first time. As has been widely reported, once people finally break their social conditioning in a naturist environment, they usually become comfortable within a short period, sometimes only a few minutes.

It’s an unfortunate reality that some members of our society have developed views of sexuality and the body that are inconsistent with naturist values. Since their intent in visiting a naturist environment is inappropriate, they must be excluded. When forced to be nude, they generally feel vulnerable because naturist ideals are not consistent with their attitude. Then they leave, or their intent becomes noticeable and they’re asked to leave.

So much of the world is intolerant of our values that we spend most of our time feeling that they are under assault; so much so that many naturists are afraid to even tell others of their beliefs. A visit to a naturist club should provide a time when we feel surrounded by like-minded people who share our passion.