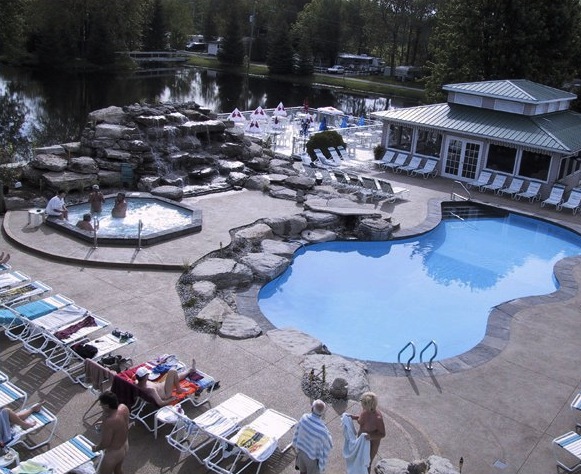 The Federation of Canadian Naturists (FCN) just sent out the following announcement:

The Four Seasons Nudist Resort, in Freelton, Ontario, has announced that they are going textile on May 1, 2011.

In a letter dated December 10th, 2010, Paul Colvin who is the president of the Four Season’s owner, Castle Vacations Parks, blamed some of the members for the change. He says “The lack of co-operation of some members in welcoming new managers, staff, guests of the resort and most of all, new prospective members of The Four Seasons Resort has been both disappointing and discouraging. This goes to events as simple and unkind as challenging partially clothed guests in the pool area, making it difficult if not impossible to enrol new members.”

The letter explains that clothing will be required starting on May 1st and that this new policy will be “strictly enforced”. It is the resort owner’s plan to change the zoning to allow for a residential community and a seasonal trailer park.

The tone of the letter suggests that a great deal of animosity has built up between some of the members and the management. A paragraph titled “Security Issues” talks about thousands of dollars of damage to the clubhouse by a resident. It then adds that “even though we know some members were witness to these events or have information that would assist the police, no one has come forward.”

On the fall of 2009, Hans and Lisa Steins sold the Four Seasons Nudist Resort to Castle Vacation Parks. It has been for sale since 1999. Over the decade that followed, the FCN received numerous complaints about deteriorating facilities and a lack of standards. The new owners initially planned on continuing to operate the resort as clothing-optional. So the news of the sale was greeted with great anticipation since the purchaser had the financial resources to restore the facilities and expand the resort. Long-time nudists, Tom and Lynda Landers, were hired to run the resort. Tom had a great deal of experience having managed the Caliente Resort near Tampa, Florida. Unfortunately, the Landers resigned in the spring of 2010 for health reasons.

The Four Seasons was founded in 1969 by Hans and Lisa Stein. It gained international attention with the tremendously successful Miss Nude World contests. In 1970, the first year the contest was held, twelve contestants vied for the title. The panel of distinguished judges included the famous Toronto radio and television broadcaster Gordon Sinclair. (making his own fashion statement in a fine kilt)  Media coverage was so extensive that it preempted reports about Prime Minister Trudeau’s attendance at the reopening of the Welland Canal on the same weekend.

The Four Seasons featured the most elaborate resort amenities of any nudist club in Canada with its nightclub, gazebo, 3 bars, restaurant, snack bar, indoor pool and outdoor pool with a waterfall. The clubhouse also contained a gym, motel rooms, a sauna and whirlpool. The resort was particularly famous for its 8 ton platform that was lowered from the ceiling onto the swimming pool to create a dance floor.

In my opinion, this is just another example of a lack of succession planning on the part of some owners. Glen Echo was sold as a private residence after 54 years. Now the Four Seasons is gone after 50 years. At least in this latest situation, I have to give the Steins credit for selling to someone who would at least try to maintain it as a nudist club. But there are other examples out there of club owners who have done even better. They planned for a transition decades before they were ready to retire. In some cases, they sold to their members. But they didn’t try to do it overnight. They carefully planned it out.

I’m surprised that the individuals who started these businesses because they were passionate about nudism/naturism would let their work disappear so easily. I would have expected them to try and find a way to have their legacy continue in perpetuity.