My experience in naturism as a woman and a feminist 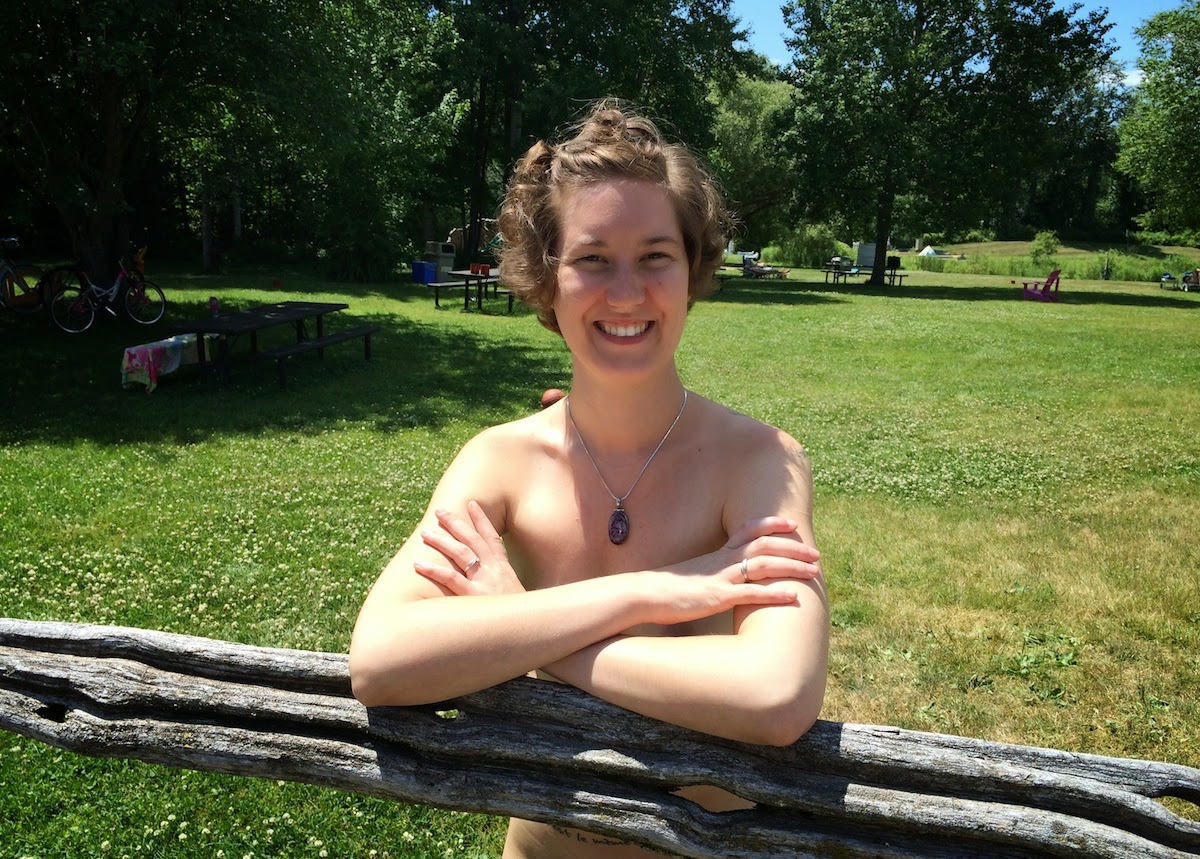 “But what about creepy men?” It’s the question I get asked most frequently by men and women alike when I say I work in a naturist resort. I typically reply that I could get as much creepy attention from men working at a Starbucks, and probably more. Yes, from time to time there will be a fella, almost never a woman, who makes a gesture or a comment that makes me very conscious of my body. But in my experience, it happens less often when I’m at work than it does on the street.

For example, after one of my first shifts at Bare Oaks I went home to my neighbourhood in downtown Toronto, and was on a trip to the grocery store when, not once but twice on a twenty minute walk, the male passengers of passing vehicles hung their heads out the window and cat called me. I was wearing short shorts, and I felt self conscious. On the same trip to the store I was stared at repeatedly, and started to think that maybe I had something stuck to my butt. Nope, just a woman in shorts showing leg. I actually asked my husband if I was too fat to be wearing those shorts when I got home. Maybe that’s why everyone was staring at me? I could describe the way it made me feel as being “naked”, but really, it made me feel vulnerable. When I really am naked, I never feel so ashamed, so exposed, or taken advantage of.

When I’m at work and something uncomfortable happens, in fact, I actually don’t feel ashamed. I feel certain that the other person is acting inappropriately. I’ve done nothing wrong. They’re the one’s who are being creepy. And it’s strange that I can’t feel that way in the “textile” world, isn’t it?

In the textile world I have to wonder what I’ve done to bring on this behaviour. In the story above I mentioned that I was wearing short shorts. Does that make it my fault that I was catcalled? Does that mean I deserved to be made to feel uncomfortable? I sure hope not, but in the end, that must be how many people see it. I imagine that the men who made comments to me in the street thought their behaviour was innocent. I try to think the best of people, so I imagine they didn’t expect me to break out in a nervous sweat and wonder if there was something I was doing wrong, or feel that I’d put myself in a dangerous position. I imagine when they do the same thing to a woman out on the town in any situation they don’t realize she may be thinking “am I asking for rape?” Because, ideally, no woman is asking for rape. We all know that, right? But it’s been so ingrained in many of our heads that what we wear or how we behave might lead to unfavourable violent situations, when someone shows us too much attention it can sometimes send a woman into a spiral of anxiety. We know better. We should have known better.

And cat calling is one thing. Then there’s people who feel like they have to reach out and touch someone.

This summer World Pride was held in Toronto, and I was downtown enjoying the parade and the crowds, walking up Church Street, and thinking it was so damn hot I was maybe going to take my top off. Going topless is legal for women in Ontario and I’m not kidding, it was blistering hot. I had never taken advantage of the law before, and was nervously trying to amp myself up to just go ahead and get topless; it was Church Street after all and countless men were walking around completely in the nude. But before I summed up the courage, a young man walking past me in the opposite direction with his friend said “Yeah baby” and smacked my ass as he passed me. I was shocked that something so inappropriate could happen right in the middle of all the good vibes going on in the street, and I whipped around to glare at him. He laughed, put his hands up, and kept walking. I stood there, boiling with rage for a moment, looking around for someone to complain to. This man just groped me in the street. He felt like he should touch my body. Because, why? He thought I was attractive? So he turned me into a sex object, an actual object that he could touch when he wanted to, because he thought I was sexy. Needless to say, after that, I didn’t get the courage to take off my top.

At work, on the other hand, I have never been touched inappropriately. Even thinking of someone getting that far seems unbelievable. First of all, questions would have been raised and an individual who seemed to be exhibiting inappropriate behaviour from a distance would have been dealt with immediately. If anyone went as far as to touch someone against their wishes, well, lets just say bad shit would happen. They would find themselves faced with an entire community outraged, and they would know what they’d done was wrong. They’d be on the wrong side of things.

At work, I almost never feel sexualized. That weird tension when you know someone’s just talking to you because they’re trying to flirt, almost never happens. I never wonder if I look fat. I never wonder if anyone is judging my body. Fashion doesn’t matter. I always fit in with everyone else in skin, and I always stand out in my own way. I find it’s easier to talk to people without my clothes on. I find I am both more accepted and more accepting. Everything is out in the open, so anyone trying to figure anything out about me pretty much just has to listen to my words.

Some women feel they can’t leave the house without makeup on. Most of us would admit that this comes from cultural norms which obligate women to be attractive, appealing to look, at all times. I stopped wearing makeup when I was 21. I found the liquids, pastes, and powders were making me break out, and I was never very good at getting it all to look right. I still put it on, from time to time, for a night out, or a job interview, or sometimes just before I get into the shower because it’s fun. But I don’t make it part of my daily routine, and I find the time it would take me to do it every day isn’t worth it. That’s how I feel, and that’s not for everyone.

I look at taking my clothes off the same way. As much as our clothing can say a lot about us, I often worry that my clothes aren’t saying what I wish they would. I’m not good with fashion. In some situation I feel anxiety and stress about what I should wear, or the appropriateness of what I have on. Taking my clothes off can be like taking my makeup off. Like refusing to play the game of trying to look good to please other people. This is my body. This is how I look. Deal with it. I am happy with my body, and I’ve worked hard undoing years of teenaged programming to feel that way. I feel better in my skin than I do in the uncomfortable clothing that has gotten too big or too small as my body has changed, the clothing I can afford on a student budget. I just don’t understand what is so offensive about my body? Just for being a body.

I find feminism in naturism. I find equality. I find a place where I am not obligated to look the way anyone else looks, because it is very obvious, when it comes down to skin, that we are all different and there’s no use comparing. I find a place where sexualization and sexual harassment aren’t tolerated. I find a place where people look out for each other, take care of each other, and respect each other’s individuality and individual life experiences. These are all things I hadn’t expected to find in naturism, but I’ve been pleasantly surprised. When we loosen the grip of obligatory sexualization for a little while, beautiful things can blossom.