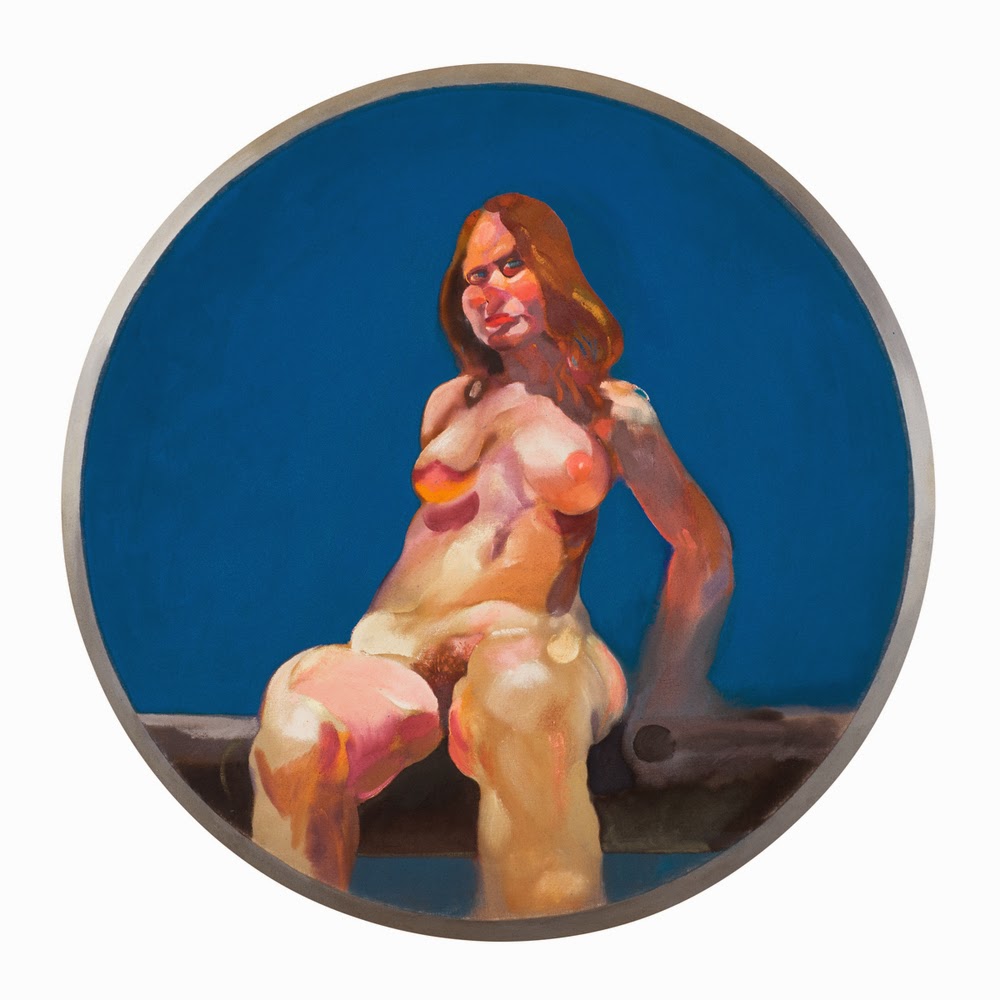 Bare Oaks Family Naturist Park has worked with THEMUSEUM to organize a clothes-free evening in the Getting Naked exhibit of nude art on Friday, March 27, 2015 from 7pm to 10pm. You can buy your tickets here. If you want to use Facebook to invite others, here is the event. If you prefer Google+, here is the event.

By being nude themselves, the viewers will experience an atypical relationship with the art. No longer in a position of being a mere voyeurs, the exhibit guests will become part of the works themselves as they explore their own feelings in relation to the artists’ intent.

THEMUSEUM in downtown Kitchener, Ontario put together this special exhibit to showcase some of the all-but-forgotten nudes, unclothed and naked pieces of art in the Canadian Art Council Art Bank’s collection. Many of the artists are recognized Canadian icons, well known for other works, however the nudes have remained rarely seen.

Victoria Henry, Canadian Art Bank Director, wants to see these pieces displayed. But she says that “no one has had the courage to show the works until David Marskell of THEMUSEUM enthusiastically agreed.”

Marskell, who is CEO of THEMUSEUM, wants to take the discussion beyond the art. That is why he said that they are going “to pair the exhibit with discussion around nudity and culture.”

“Since its rebranding and evolution over the last several years, THEMUSEUM has made its mark in establishing itself as an organization that is not afraid to make bold choices,” says Virginia Eichhorn, Getting Naked Curator. She also says that “it seems surprising that here, in 2015, we can be made so uncomfortable with seeing a bit of skin. Why is that? Getting Naked sets out to answer that question as well as to provide examples of the enduring power of the human figure, in all its naked glory, as a powerful purveyor of meaning and representation of many ways and states of being.”

The Getting Naked exhibit opens March 7th, 2015 and runs through May. But there will only be ONE opportunity for to be nude while viewing the nude art – March 27th from 7pm to 10pm

The nude event is part of the Naked Dialogues. There are a number of very interesting events:

This documentary shows how women are portrayed in advertising, specifically the over sexulization, negative stereotypes of body images, and objectification. It gives a critical overview of the advertising world’s treatment of women.

Many Shades of Naked: Food in Waterloo Region

This session will, in a deliciously voyeuristic way, look at the many shades of naked food and naked eating in Waterloo Region from nakedness that Schmecks to eating in the raw.

Friday, March 27, 2015
Naked in the Gallery – Experiencing the Artwork Unclothed
Presented by the Bare Oaks Family Naturist Park
By being nude themselves, the viewer experiences a different relationship with the art. No longer in a position of being a mere voyeur, the exhibit guest now becomes part of the work itself as they explore their own feelings in relation to the artist’s intent. Join us at THEMUSEUM for this unique, artistic experience. Visitors will arrive clothed and have the opportunity to undress in a safe, semi-private area, leaving behind the multitude of boundaries and restrictions clothing imposes on the body and individual. Visitors are invited to explore the exhibition at their own pace, admiring the art, conversing with one another and celebrating nakedness.
This event is open for all ages, children under 13 must be accompanied by a parent.
7:00pm – 10:00pm. $10.00 (including HST).

It is normal to be embarrassed, ashamed, and even offended by our own image. But over a century ago, some people began to think that this attitude was not natural. This talk will discuss the beginnings of the movement in the late 19th century, the various principles behind the beliefs, and its evolution over the last century as well as the current situation.

Please Note: The presentation contains vivid and honest images of all parts of the human body.

Documentaries – Behind the Robe: The Faces of Nude Models

Life models are often at the heart of nude artwork. They pose for artists who interpret their figures into works of art, but are rarely acknowledged. Marshall Ward, a fine arts instructor, decided it was time for life model’s stories to be told. His documentary explores the lives of two models, Ed Cz and Georgina Brown, and allows them to discuss their work, both intellectually and physically.

This documentary explores the use of fig leaves to cover up nakedness in art pieces throughout history.

Not Always a Prude: The History of Nudity and Censorship in Hollywood Film

Today, the preconception we have of Classical Hollywood film is that it presented a sanitized “Leave it to Beaver” world where everyone abstained from sex until marriage and married couples never slept naked (or even together, for that matter!). While that might be true in films produced from the mid-1930s to the mid-1960s, before 1934, Hollywood relished in sex, adultery, and nudity. The history of Hollywood onscreen nudity is the history of film censorship. This talk will begin with a discussion of Hollywood’s “Pre-Code” films of the early 1930s that depicted sex and nudity with comfort and frequency, and then the impact of those depictions in terms of the rise of censorship. Decades later, when the system of self-censorship—the Production Code—was abandoned in the late 1960s in favor of a Ratings System, Hollywood film began once more to indulge in the depiction of sex and nudity to attract audiences. Today, producers are forced to debate whether to include shocking sex scenes in the hopes that they will raise the profile of the film and attract more movie-goers, or whether to leave sex and nudity on the cutting room floor to guarantee a broader audience. Despite the fact that, today, we regard ourselves as more liberal than our ancestors of almost a century ago, in this talk, I will show how Hollywood films of earlier decades were more comfortable and realistic in their depictions of nudity compared to film today.

The Reclining Nude: From Figure to Body

This two-part talk will address various aspects of ‘the reclining nude’ from the history of Western and non-Western art. We will survey aesthetic, art historical and socio-political contexts of the nude as it appeared in various public discourses.

Four women explore the body, its strengths, its vulnerabilities, its oddities from the familiar to the absurd and with a constant aim to be present (stripped bare to the root of emotion) this physical performance piece asks “what does it look like to be joyfully naked?”

7:00pm – Included with price of admission

Jennifer Toole will delve into the epistemological quandary of subject vs. object as it relates to the creation and display of the female nude in contemporary art and culture. Following an exploration of the agency of the muse, sexual objectification, and the male gaze Jennifer will make a case for Individualism: an all-inclusive ideological space where the artistic nude will be free to evolve productively.

Naked in the Media

Check back for additional participants

Media, no matter the medium, is a tool for sharing information with the public. Whether it is current events or breaking news, the radio, newspapers, magazines, television, internet or the vast remaining collection of mass media outlets may offer us a view into the happenings of our world. But what kind of view is being shared? What lens is placed upon the information that we intake, who decides what we see and why? When it comes to the topic of nakedness and nudity in the media, how, if at all, is the information communicated? Award-winning ad writer and bestselling co-author, Mike Tennant, will host a media panel of industry experts, igniting discussions on the topics of censorship, private versus public, marketing strategies, naked versus nude, scandals and more.

There is no other subject as dynamic and compelling as the human figure. Join us in a self-directed life drawing experience, no formal instruction will take place but a professional instructor will be present to help you with any questions or make suggestions. All skill levels will have the opportunity to draw from a live nude model, while gaining an intuitive understanding of the human form. Explore quick gestures (30 seconds to 5 minutes) and more complex poses (15 minutes and up).

There is no other subject as dynamic and compelling as the human figure. Join us in a self-directed life drawing experience, no formal instruction will take place but a professional instructor will be present to help you with any questions or make suggestions. All skill levels will have the opportunity to draw from a live nude model, while gaining an intuitive understanding of the human form. Explore quick gestures (30 seconds to 5 minutes) and more complex poses (15 minutes and up).

More details on the Getting Naked exhibit can be found here: www.themuseum.ca/exhibition/opening-getting-naked-exhibition

After Naked in the Gallery, you are invited to socialize downstairs (clothed) at Imbibe: www.imbibefooddrink.ca

There are a number of hotels in the area if you want to stay overnight: www.themuseum.ca/planning-your-day