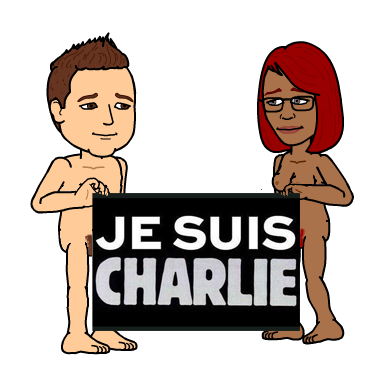 As we reflect on the horrible events in Paris, we may not think that there are any implications for naturism. Yet there are. Certainly, nobody is killing us for our beliefs. Nor are any naturists turning violent against those who oppose us. But at the core of the Charlie Hebdo event is the concept of offence. That is the same notion that is used to justify restricting your right to sunbathe clothing-free at the beach, in the park or even in your backyard at home.

The news media is debating whether to show the latest cover of Charlie Hebdo because it depicts the Islamic prophet Muhammad. Many have censored it and justify their decision by saying that it is offensive to Muslims. It probably is offensive to many and it is unfortunate that people will be upset. But how far do we go? Some vegetarians are probably offended at seeing images of meat. Does that mean McDonald’s should not advertise their hamburgers? Some people are offended at seeing two men kiss. Some may be offended at seeing women wearing a short skirt. Where does that end?

Blasphemy and offence only exist when people who consider the ideas, words or images being expressed as blasphemous and offensive. These are not universal values. What offends one person is meaningless to someone else. For example, the French word for a seal is “phoque”. (when pronounced the French way it sounds exactly like the f-word) Spoken out loud in an English environment, it is a highly offensive word which would upset many. But in French, it is an innocent word spoken by young children and their parents when they go to the zoo.

Fundamentally, we should not prevent people from saying and doing things that don’t impact the liberty of others – even if it is offensive to some. To a naturist, being nude is natural. It does not impact anyone else other than causing offence to some.

The big story is the intolerance, extremism, and violence of a few emotionally disturbed individuals who were led astray by evil people. Our thoughts and prayers are with the victims, their families and friends. The public discourse has been about free speech. But it should also be about freedom in general. If it does not limit someone else’s freedom, what a person says, does or wears should not be subject to restrictions just because it might offends others. Offence is very personal and should stay that way in a free and democratic society.

[One who is easily offended reveals their weaknesses.]