The closure of Glen Echo 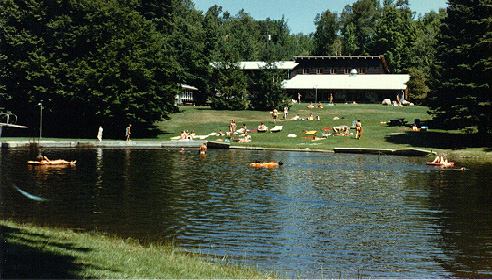 I was very sad to hear that Glen Echo Nudist Park, Ontario’s oldest continuously operating naturist club, was closing. In a letter dated August 21st, Mary and Edward Todorowsky (the founders and owners of Glen Echo) announced that the park would be closed effective October 1st. Apparently, the property has been sold to an individual as a private residence.

Several people have asked me whether I’m happy about this. After all, it is well known that I tried to purchase Glen Echo several years ago and it ended in a disagreement between the owners and I. Some also theorize that Glen Echo is competition for Bare Oaks given that they are a mere 30 kilometers away.

The fact is that I am sad that 54 years of naturist history is coming to such an abrupt end. I’m also sad for the hundreds of people who grew up at Glen Echo or who raised their children and grand children there. Many members are being forced to abandon elaborate cabins that have been constructed and expanded over the decades.

It has certainly generated a lot of press. See:

From a business standpoint, the loss of a naturist park in the Toronto area is a bad thing. We are not in competition with each other. There are at least 400,000 people in the Greater Toronto Area, according to a survey by the Federation of Canadian Naturists, who are interested in naturism. If I add up all the clubs in the Toronto area, I only get to less than 5,000 members. Even if I assume that another 5,000 people are visitors and not members, that still leaves 390,000 people unaccounted for. If we assume a huge margin of error (which is unlikely given the methodology) I am still left wondering where the other 90,000 people are.

In my opinion, they are not visiting naturist clubs because of a lack of awareness. When I talk about Bare Oaks to my neighbours I frequently get a surprised reaction that “there are places like that in Ontario.” All naturist clubs need to work together to get the word out. If we managed to get another 10,000 people participating in naturism, we would all be completely overwhelmed! That’s why we need more clubs than less.

It’s true that Glen Echo’s membership had been dropping steadily in the last decade. But that’s not because there aren’t people interested in naturism. The steady growth of young families (who have never tried naturism before) joining Bare Oaks proves that. Glen Echo could have continued to be very successful. But to do that, they needed to improve their offering. People are no longer willing to camp in a tent without water and electricity. That was fine in the 1970’s but today they want 30 amps for their dishwasher and microwave. People also work more hours and have less leisure time so when to join a club, they expect full service and modern amenities. Gone are the days where naturist club members would all pitch in to clean, mow the lawn and cut down the trees on weekends. Now, members expect to be served but they are willing to pay for it.

So all this has motivated me to start working with the remaining three clubs in the Toronto area. The Ponderosa was sold several years ago and has spent a lot of money improving the amenities. The Four Seasons was also sold recently to new owners. They have budgeted a lot of money towards improvements. Many changes have already been made despite the fact that the deal has not completely closed yet. All three park owners have met and are in agreement that we are not in competition and that we all have much to gain by doing joint promotions.

Besides, each club is truly unique. While we all share the naturist/nudist label, the application and interpretation of the philosophy varies greatly in each club. Some clubs offer a more urban experience while others are more nature-oriented. Some are passionately naturist while others are more clothing-optional. (click here to read why Bare Oaks is not clothing-optional) We don’t even all agree on whether to use the term “nudist” or “naturist”. (Listen to the Naturist Living Show titled Naturist or Nudist for a discussion on that topic.) So between the 3 of us, someone will offer the type of naturist experience that each person is looking for.