Our children are being raised in a society where we are constantly bombarded by messages that make us feel ashamed and insecure about our bodies. We are told that we are only worthy if we reach the impossible ideals of the beauty myth. Concurrently, our bodies are also being objectified and over-sexualized. Naturism is the very antidote to all those ills that afflict our world.

Children raised in naturism learn to accept the human body and recognize that everyone is unique. Comfort with nudity combined with naturist values lead to a healthy self-image and strong self-esteem. Although good parenting is by far the most important factor in raising children, naturism helps to promote their confidence and understanding about their bodies. 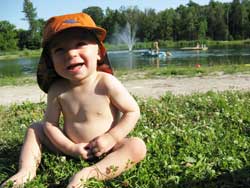 Anyone who has observed children knows that they are enthusiastic naturists. We have never seen young children who are self-conscious when nude. In fact, you may observe them squeal with delight when they are allowed to run around nude. It is only in their later years that they are pressured into being self-conscious and adopt older people’s phobias about the body.

Some who have no formal training in child rearing might conclude that non-sexual nudity might be harmful given the information provided by popular authorities on childcare from Benjamin Spock to advice columnists Ann Landers and Abigail van Buren. However, none of those so-called experts based their conclusions on any scientific evidence. In the case of Spock, this ill-formed message arises from his early reading of Sigmund Freud, who did not use any scientific methods in his conclusions.

A multitude of scholarly research studies on this topic in psychology and sociology have shown that children reared in an atmosphere containing family social nudity benefit from the practice.

Naturism helps children learn to respect their own bodies and those of others. There is no evidence that children are harmed by non-sexualized social nudity, and there is good reason to believe they benefit from it.

Children and Naturism – Questions and Answers

It is important to note that naturism is not a panacea for raising children. Good parenting is based on a large number of factors. Clearly naturism can assist parents in raising healthy and confident children. But there are many more factors involved in developing a child’s emotional, cognitive and social abilities.

Are you considering trying naturism for the first time? If yes, please see our First Visit page.

Don’t children get confused as to when and where they can be nude?

Everyone has to teach children when and where it is acceptable to be nude. Naturists simply have more places where it is acceptable. Unlike non-naturists, we don’t teach our children that nudity is wrong. We teach them that some people aren’t comfortable with nudity and that sometimes we need to dress for practical reasons (e.g. weather).

Are children forced to be nude?

The word “forced” is an emotionally loaded word that suggests unreasonable force or other inappropriate coercion. The reality is that as parents we have a duty to teach our children to behave appropriately. We teach them to brush their teeth and to eat healthy foods even if their desires might be contrary. However, when it comes to nudity, children are always comfortable with nudity until they are taught otherwise by society. With young naturist children, it is just as likely that parents “force” them to wear bathing suits when visiting municipal pools where bathing suits are mandatory. Obviously, some sensitivity is required in the case of older children who are being introduced to naturism for the first time. But ultimately, children must learn to respect the rules in any place they visit.

Why not wait until they’re old enough to decide for themselves?

It is a parent’s duty to endow their children with the values that they feel are important. We make many decisions for our children. When we decide about their religious, educational, medical and cultural directions, we do so in the belief that we are doing what is best for them. Naturists believe that comfort with nudity leads to a healthier self-image, strong self-esteem and, eventually, a more normal sexuality. The scientific evidence appears to support these beliefs.

Won’t it cause the children to have troubles with their peers?

Unfortunately, few children will grow up without being subjected to some level of ridicule from their peers. The reasons can be varied – from participation in certain activities to being part of a religious group. Naturism is no different. Since naturism tends to foster self-confidence, many children raised as naturists know how to handle the teasing. As well, children learn instinctively what to reveal and to whom.

Naturists teach that nudity is not related to sexuality. We believe that naturism is an effective way to combat the overly sexualized society we currently live in. Naturist children learn that the body is not to be objectified. Unlike people whose first exposure to genitals is through pornography, naturists learn that all parts of the human body are normal. In general, there is overwhelming evidence that education leads to lower teenage pregnancies and lower incidence of sexually transmitted disease among young people.

Won’t it desensitize children to sexuality?

This is a common question that is strangely opposite to the previous question. Sexuality is not limited to nudity. The fact that we hide certain parts of our bodies causes an artificial construct where we are aroused by those parts that are hidden. True sexuality is in the mind and is based on a thought, a look, a touch or a suggestion. Naturists have a very healthy sexuality because they are comfortable with their bodies and themselves. They respect their own bodies and that of others, which leads to better relationships. In fact, a research study in the 1980’s indicated that naturists had a lower incidence of deviant sexual behaviour than the general population.

Doesn’t it put children at risk from predators?

It is clear that being dressed has not kept children safe. Those who prey on children are attracted to any place where children can be found. It is a sad reality that they have been found as priests, teachers, scout leaders, hockey coaches, etc… It is therefore unrealistic to suggest that we should avoid any place that might attract them since we would rob our children of all of those institutions that are so important to their upbringing. 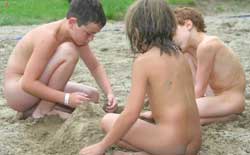 The best thing we can do is to teach our children the confidence to speak up when people do things that make them uncomfortable. If they are not ashamed of their bodies, they are much more likely to tell their parents when someone does things to them that they don’t like. If we are informed, we can help them. Whether nude or clothed, children should know that being touched in certain ways is wrong.

Just as an attractive woman does not cause rape, children do not cause abuse. We should not let criminal rule our lives. If we ban jewelry, we might reduce robberies. If we ban alcohol, we might reduce the incidence of drinking and driving. If we ban cars, we will definitely reduce the number of vehicular deaths. In general the risk of abuse is much lower than the risk of being injured in a car accident yet we never hesitate to get into the car. There are tremendous advantages for children who grow up comfortable with their own bodies. There is no advantage in teaching them to be ashamed and embarrassed by certain parts of their bodies.

With regards to naturist environments, they tend to have stronger feelings of community than within general society. Naturism is a group and family activity, which means that children are rarely left alone and vulnerable. Individuals with bad intentions within naturist environments are generally easier to identify. In fact, anecdotal evidence suggests that naturist environments have a lower than average incidence of sexual predators.

Isn’t a photo of a nude child, pornography?

Child pornography where children are abused is intolerable and should be stopped whenever it is found. However, in a well-meaning attempt to stop the abuse, many people have become confused as to what is child pornography.

Mere nudity is not pornography – There is nothing more wholesome than the nude human body. In fact, it is our disconnection with the natural human body that is at the root of many of society’s ills.

Pedophilia is not caused by images – Pedophilia is a disorder that, in part, causes those afflicted to seek out imagery of children. However, pedophiles existed long before photographic equipment was invented. Their disease is what causes them to seek out children whether in image form or in person.

Nude images of children are not the problem. Pedophiles get arousal from any images of children. They are aroused even by what is clinically called “neutral” imagery. However, even if we managed to get rid of all images of children (dressed or not) we would not reduce the number of pedophiles. The disease would still exist and they would find other ways to fulfill their desires.

We must punish the perpetrator not the victim. As a society, we must be careful not to cause harm to the victims in our attempts to protect them. In the case of pedophilia and child pornography it is important to remember that it is the pedophile who is the criminal. If we cause parents and children to become afraid of the human form, we will only succeed in causing psychological distress without stopping the pedophile.

Why does anyone need pictures of nude children?

Children are beautiful. The human body is beautiful. Why turn it into something shameful? To naturists, nude pictures are just as normal as any other pictures. As discussed above, any picture can become pornographic in the wrong hands. Besides, do we really want to take away freedom from the majority because of the actions of a few sick individuals?