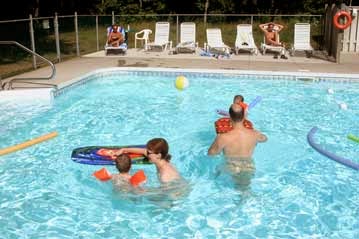 Alas, patching the existing liner has failed. But the good news is that you can fix a lot of things if you’re willing to spend a lot of money. We have order a new liner and paid for rush service. It should be ready early next week. The installers are putting a rush on it too and it should be installed next week – if the weather is good. You can’t install a liner in a sand-bottom liner pool if it is raining.

We have also scheduled trucks to bring water to fill the pool with water. That is much more expensive but the pool will get filled in hours instead of days. So possibly the pool could be open next weekend – but that’s certainly not guaranteed!

As we previously explained, the pool had a leak in the pipes last year. We applied some temporary fixes that kept the pool running rather than shutting it down until the end of the season. But we had to bypass the solar heater so it was cold!

We dealt with the leak in the pipes this spring. But we had to pump out the water to do it and that complicated things. As everyone noticed, the weather was very cold late into the spring. The liner needed to stretch as the weight of the water went in but that didn’t work well with the temperature being low. So we had to put hot water into the pool to help the liner stretch. Unfortunately, it didn’t stretch enough. It popped out in a few places (which we fixed) and broke in one place. We patched that and managed to completely fill it. But success was fleeting. The patch started to give way so we had to pump the water back out. We tried a stronger patch and filled it again but it failed and the rip got worse. So a replacement liner became the only option.

Keep an eye on the Twitter feed for updates on our progress: