Nudity in French Culture – Will it change? 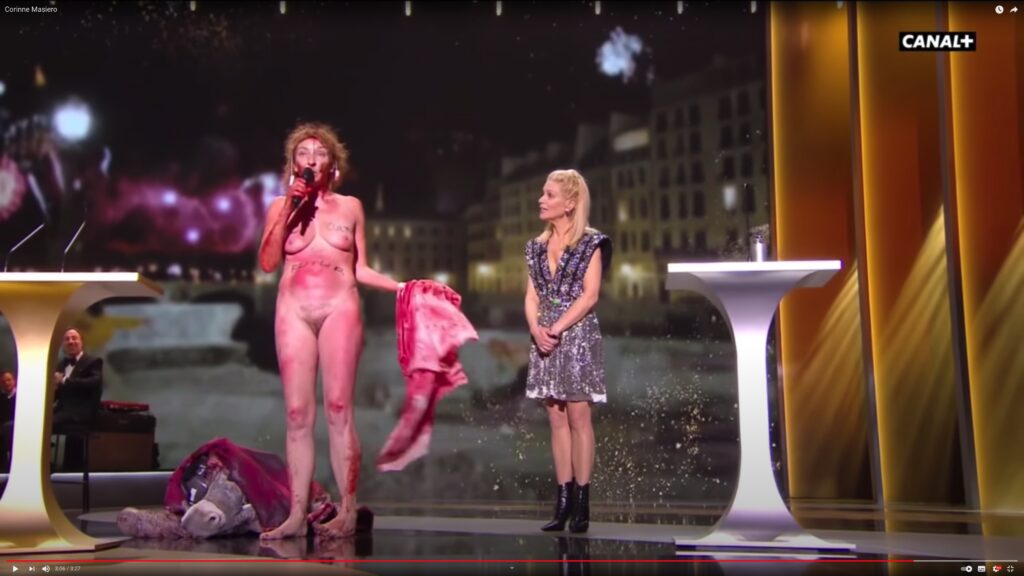 Yesterday, Corinne Masiero stripped nude to present the nominees for the best costume at France’s César film awards. The actress was protesting the lack of support for cinema during the pandemic. The audience reaction? Applause! Was she then rushed off the stage? No, the host simply asked her about the nominees. Ms. Masiero then calmly proceeded with her presentation without any attempt to cover up.

The entire event was broadcast on television without any censorship. Today the news in France does not report any scandal. Why would there be? We’ve always seen France as a society that was quite tolerant of nudity. Unlike many other cultures, they don’t seem to see naked bodies as harmful. But will it stay that way?

French television series and films created specifically for Netflix appear surprisingly bereft of nudity; even when its presence would seem appropriate. Is there pressure by the American company that is funding the productions? Or is it self-censorship by the producers who understand the sensitivity of international audiences? Is it truly a French film if it is made to American standards?

Not surprisingly, the social media channels of French publications are avoiding the nude version of Corinne Masiero; opting instead for earlier images in her blood-stained protest gown. Yet the most newsworthy photo is clearly her nude body with the words “No culture, no future” painted on it. This self-censorship is understandable as nudity of any kind is regularly deleted or hidden by Facebook, Instagram, Tik-Tok, and others.

The argument has always been they are private businesses and that people are not obligated to use them. But who can afford not to be present on Facebook? They boast about reaching over 3 billion people with more than 100 billion messages every day. That is a de facto public place.

Some of the community standards appear to allow for nudity under certain circumstances. The reality is that enforcement is inconsistent and there is no effective appeal process. It has been well documented that moderators have mere seconds to decide whether to allow or ban content. Worse, more of these decisions are now made by computer algorithms. Yet whether something is art or not is about subtleties and context. So in the face of this, it is not surprising that publishers of content opt to take the safe route and self-censor.

Clearly mainstream social media is influencing cultural expression. They claim to enforce “community standards” for the benefit of their audience. But that is an ethnocentric view of the planet. Communities differ greatly from one place to another and that is what makes our world so interesting. Unfortunately, the ubiquity of major social media platforms and globalisation appear to be reducing that diversity. Perhaps it is time for governments to impose their own community standards on the social media companies.

To hear how social media censorship hurts naturists, listen to the latest episode of the Naturist Living Show Podcast: https://www.naturistlivingshow.com/2021/02/censorship-in-social-media.html